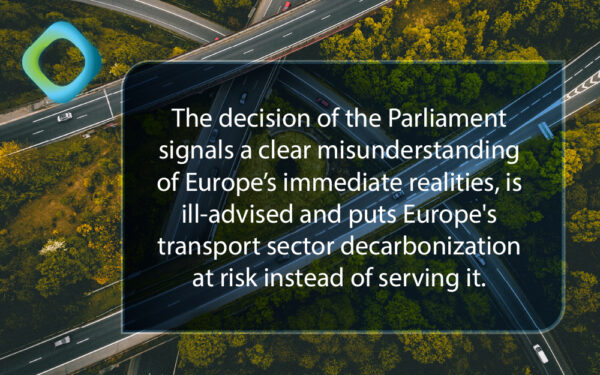 Brussels, 09 June 2022 – On June 8, the European Parliament plenary voted on the CO₂ emission performance standards for cars and vans and regretfully failed to agree on a pragmatic and practical approach to resolving the decarbonisation challenge in Europe’s transport sector. NGVA Europe sees that vote as a move against the EU’s energy and transport policies' key principles – technology neutrality and sovereign freedom in choosing the path of achieving EU targets. More specifically, NGVA Europe strongly regrets that this will significantly limit the rapid and effective contribution that renewable fuels such as biomethane can make to transport decarbonisation.

By introducing a de-facto ban on new cars and vans with internal combustion engines from 2035, the Parliament has practically denied each Member State’s right to develop transport policies that match the profile of their respective economies without generating unnecessary stress on citizens and industries at times of extremely high energy prices. The introduced intermediate targets also limit Member States’ opportunity to pace their progress in order to maintain competitiveness, security of supply and social acceptance of reforms in the transport sector without compromising the EU’s general decarbonisation targets for 2035.

We believe this decision of the Parliament signals a clear misunderstanding of Europe’s immediate realities, is ill-advised and puts Europe's transport sector decarbonisation at risk instead of serving it. This position of the European Parliament puts a lot of pressure and expectations that the coming Trilogues will be the last opportunity for the final decision to be grounded on dialogue and hold truly at heart the objective for Europe’s carbon neutrality instead of exclusively promoting a specific technology.

NGVA Europe took part in the workshop on carbon LCA of vehicles organised by the Working party on Pollution and Energy (UNECE - GRPE) in Geneva, with the Universidad Politecnica de Madrid (UPM), both partners in the EU-funded project Life…

With the ‘Fit for 55’ package, the European Commission has put forward key proposals to put the EU on a trajectory towards climate neutrality in 2050. We strongly support the overall political ambition and look forward to the challenge of…

NGVA Europe's Senior Vice-President Nadège Leclercq has been presenting about 'Biomethane and Hydrogen as Transport Fuels' at the REGATEC conference in Malmö on 17 May 2022. The presentation can also be watched directly on YouTube.