This month, a milestone for sustainable transport in and for Europe was reached: the two hundredth LNG fuelling station was opened. These stations provide fuel for the over 6.000 LNG trucks now running in Europe driving a low-carbon emissions transport system that natural and renewable gas offer.

This growth of LNG fuelling stations goes alongside with a dramatic increase of CNG stations to 3.630 (in Europe + EFTA). This number is increasing daily.

Raise of biomethane for transport

Also, there are more and more fuelling stations, providing 100% biomethane for European costumers. With 44 stations in Germany now also offering 100% biomethane, today we count already 457 fuelling stations delivering biomethane across Europe. Natural gas can be blended and progressively replaced by renewable gases such as biomethane or synthetic gas, both able to drastically reduce or even eliminate related greenhouse gas emissions contributing to global warming.

This development is backed by the Member State targets which are outlined in the Directive on Alternative Fuels Infrastructure (2014/94/EU). Such policy instrument, alongside with projects such as the LNG Blue Corridors, which strongly contributed to establish LNG as a real alternative for medium- and long-distance transport, are important enablers for new CNG and LNG mobility.

Looking towards the future, NGVA Europe in collaboration with the European Biogas Association (EBA), has developed an industry roadmap outlining the growth of both CNG and LNG stations in Europe towards 2030.

In this important occasion of the 200th European LNG fuelling station, NGVA Europe is glad to present the new updated version of its CNG & LNG stations map with new functions and modern user interface. The map not only provides an overview about European fuelling stations, but also offers vast information ranging from fuel nozzles at the station, or opening hours, to detailed navigation services and planning for European costumers. 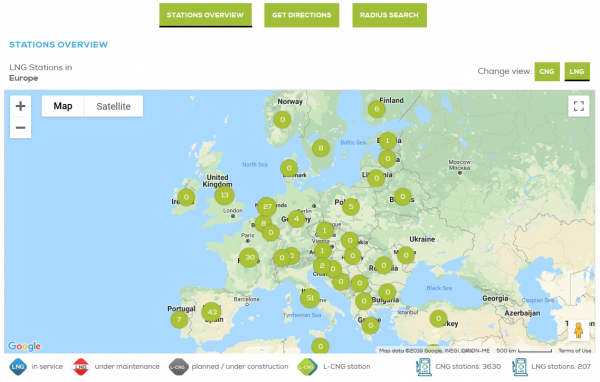