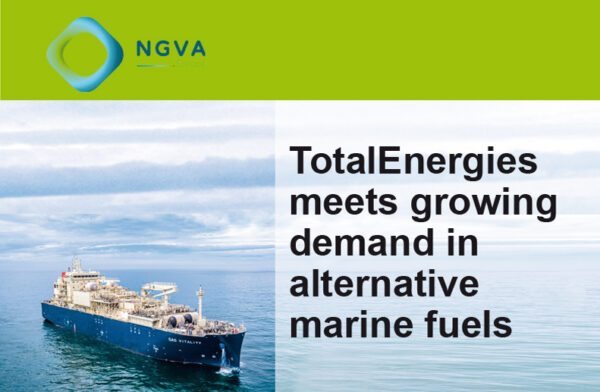 NGVA Europe member TotalEnergies is the world´s largest supplier of LNG as bunker fuel for shipping. In its forecast for the marine energy demand towards 2030 and 2050, it predicts a growing overall demand to meet the worldwide cargo activity. And just like the shipping sector is moving forward, also LNG is a fuel in transition.

LNG technology to deliver GHG reductions is available now and is lighting the way for a wider adoption of bio-LNG and renewable synthetic LNG. That´s a step by step path towards a decarbonized future. “As a next step in its evolution, we believe that biomethane, together with LNG, can provide a viable pathway to achieve shipping's decarbonization goal. The biomethane market is growing and has huge opportunities to become a global industry," TotalEnergies said. Therefore, the company wants to increase its biofuels production from 0.3mt/year in 2020 to 2mt/year by 2025 and 5mt/year by 2030.

For the distribution of today’s LNG, TotalEnergies has 26 LNG bunker vessels in operation globally and will expand its fleet to 43 units offering an aggregated capacity of 7 to 8 million tonnes per year by early 2024. This development also takes up speed in Europe with the first ship-to-ship LNG bunkering completed by TotalEnergies in Marseille Fos this January. The company bunkered the CMA CGM Bali, transporting 15.000 20ft containers (TEU), with 6.000 m3 of LNG. The port of Marseille is planned to become the first LNG bunkering hub in France for shipping, supplying all of the Mediterranean and South Europe area.

The International Maritime Organization (IMO) and its members of shipping cargo carriers around the world have set goals to reduce the total GHG emissions by at least 50% from 2008 levels in 2050. LNG´s benefits as a viable marine fuel were demonstrated by the multi-sector industry-coalition SEA-LNG and its 2021 study together with SGMF reconfirmed possible greenhouse gas reductions of up to 23% from using LNG as marine fuel, compared with standard conventional fuels.

But most importantly for the constant and growing demand in fuel for cargo shipping: LNG is a proven and mature technology, readily available and with a rapidly growing bunkering network to store the alternative marine fuel. “LNG offers the simplest and lowest risk transition to zero-emissions for the maritime sector, starting now,” says SEA-LNG Chairman Peter Keller.

Ship owners and operators understand that the pathway towards a net-zero shipping future starts with the transition to LNG-fuelled cargo ships, able to operate on bio-LNG and renewable synthetic LNG without costly retrofit. This consciousness also shows in the numbers for 2021: the volume of LNG-fuelled newly built ships accelerated dramatically to approach 30% and even approaching 50% of all orders for ultra-large container ships, which underpins the global trading system.