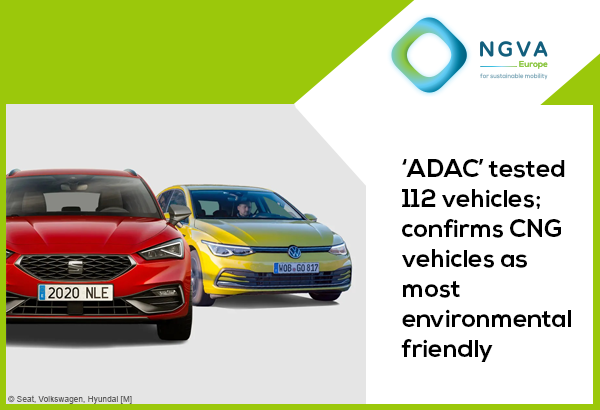 In its ‘Ecotest 2021’, the German ‘Allgemeiner Deutscher Automobil-Club e.V.’ (ADAC) yet again confirmed CNG vehicles as the most environmental friendly. Out of the 112 vehicles that the automotive club tested, the CNG-powered Seat Leon TG and VW Golf TGI ranked place #1 and #2 respectively.

Among the competitors were not only Petrol and Diesel vehicles, but also full electric, plug-in-hybrid, LPG, and hydrogen vehicles. Some of these are widely seen as “zero emission vehicles”. But all drive types/fuels are treated absolutely equally in the ADAC Ecotest: a well-to-wheel approach for the entire process of energy consumption "from the fuel source to the wheel" is applied, thus also taking into account the carbon intensity of the energy source. A true technology neutral approach.

In figures: The natural gas version of the Seat Leon has a measured consumption of 4.2 kg CNG/100 km and a low 91 g CO₂/km. This calculation is based on the CNG Germany mix with a bio share of 40 %. If the actual biogas share is higher, the balance improves further. The same vehicle as a TDI cannot keep up and, despite a low test consumption of 4.7 litres of diesel/100 km, releases 147 grams of climate gas from the exhaust.

It is not surprising that the results of the Leon TGI and Golf TGI are so close together. After all, they have the same engine on board: in the models of the VW Group, a good 1.5 liter petrol engine with 96 kW/130 hp works. With 17.3 kilos of natural gas in the tank, the measured range is around 400 kilometres.

Yet again, these results impressively prove that natural gas vehicles, fuelled with biomethane, must play a role in achieving the decarbonisation of road transport. For this, European legislation must recognise the benefits of renewable fuels such as biomethane, for example with a crediting scheme for renewable fuels.

Join the related discussion on 22 February.